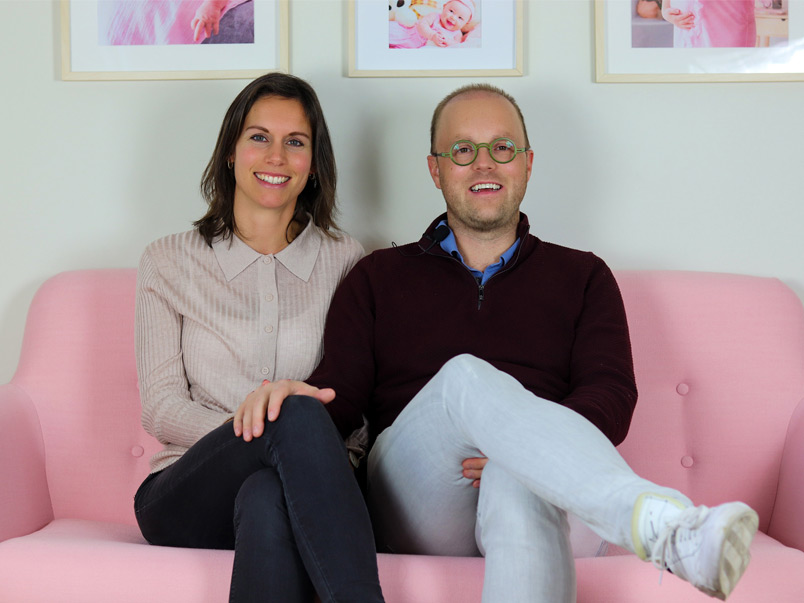 This is how our new Dutch ambassadors begin their testimony about their experience in Tambre.

Lyan and Bram, for work reasons, have lived in several countries for the past decade. During their three-and-a-half-year stay in Denmark they discovered how difficult it was for them to conceive and underwent four fertility treatments that never resulted in the baby they were hoping for so badly.

How did they hear about Tambre?

Two years ago, the couple had to move to Spain due to their jobs, but instead of giving up, they decided to give assisted reproduction another chance. “I remember Bram literally googled “Fertility Treatment Spain, Madrid” and “Best Fertility Treatment Madrid”, and the top results showed Clínica Tambre” Lyan says. Also seeing the positive reviews of other patients made them request a first visit for the following week.

Lyan explains that when they entered Tambre, they felt at home right away. She says that everything was very clean, beautifully decorated and that the atmosphere couldn’t be more professional. They remember that right from the beginning they were called by their first names and that the first conversation was very positive. The professionals at our fertility clinic took a close look at what type of treatment they had undergone beforehand, the result of it and what future options should be considered.

What does the couple highlight about their experience with us?

With a completely tailored IVF treatment, Lyan finally became pregnant and gave birth to her first daughter in 2019. “We needed that personal attention, we really needed a personalised treatment plan in our situation to be able to conceive a child,” Bram tells us.

One of his highlights at Tambre are the techniques and technologies that they have been able to benefit from during their treatment, such as the  Preimplantation Genetic Diagnosis, which studies the possible aneuploidies that an embryo may have.

The couple also states that they have a great memory from the entire Tambre team regarding the warm patient care and professional treatment we have given them since they met us.

“For me in particular, it has been quite intense to go through every appointment and the treatment itself. But actually at any moment we were reassured, the team was very sweet and attentive. They were just there for us transmitting that “everything will be fine.” “It felt very sincere. I think that’s very important, ” Lyan confesses.

The story of Lyan & Bram: The second part!

Despite the fact that 2020 has been a difficult year for everyone, the couple was encouraged to return to our centre with the dream of having another baby. There are many patients who, due to COVID-19, feel a certain anxiety to undergo an assisted reproduction process. Lyan and Bram want to convey to all of them that at Tambre they have felt completely comfortable and safe at all times.

“The layout of the building, with separate waiting rooms, has always created a discrete atmosphere. Now it is even more practical and nicer if you are waiting for your appointment, that you are able to avoid close contact to other patients. During the appointment itself there is also always sufficient distance and of course the entire Tambre team uses protective measures, such wearing a face mask at all times,” Bram says.

The couple, who is already expecting their second baby, wants to point out that they have only had a positive experience with fertility treatments in Spain. “Achieving your dream once is amazing, but then again, that is indescribable. We are very happy,” they say. Since they started looking for information on the subject, they realised that Spain is a country where assisted reproduction is extremely advanced. In fact, one of the reasons they decided to trust Tambre was our 40 years of experience. “If I were to live in the Netherlands, I would also make a trip for this. Because I know that it has been worth it, what we have received in return and what we have experienced, ” Bram concludes.

We are very happy to have been able to help this great couple to make their family grow and we are looking forward to seeing them again. Thank you very much for placing your trust in us!