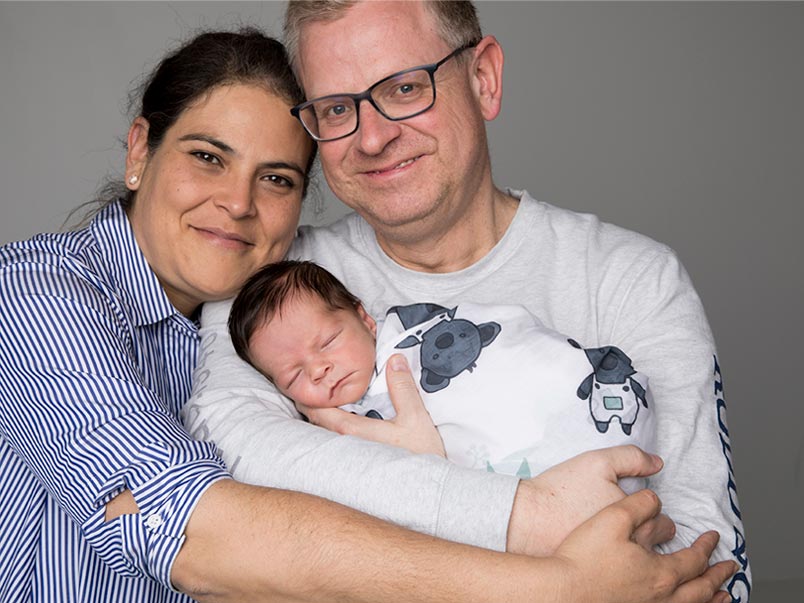 Ana and Darren are a couple coming from Australia who wanted to share with us their journey towards parenthood, which started in Melbourne and flourished at our centre in Madrid.

They decided to be parents not long after they got married. However, life sometimes throws up obstacles which can negatively affect our wishes and hopes. When they finally achieved the pregnancy they so desperately wanted, Ana unfortunately suffered a miscarriage after six weeks. After such a hard time, they decided to opt for assisted reproduction technology and underwent seven cycles of IVF, none of which were successful.

How did you come to choose to pursue your dream with us?

Having gone through so many unsuccessful cycles their doctor suggested the couple should consider egg donation, a process which offered a more substantial chance of success. Darren said, “The only way that we could do that was by going overseas”.

Ana explained that they chose the Tambre Clinic after completing a general search of treatment providers. They were always determined that the treatment would be undertaken in Spain as Ana had Spanish ancestry and was born in Argentina. Following  first online consultation with Dr. Esther Marbán they immediately felt they could trust Tambre implicitly and made the decision to begin their journey with us in Madrid.

During that first consultation the couple said they were given all the information they required to make an informed decision about their care – all their anxieties and doubts were answered clearly and they felt confident that their decision was the correct one. They were also very pleased to learn that the Tambre team planned to liaise with the Melbourne based specialists in order that the couple could undergo all the necessary tests and have access to the appropriate medications at home, before travelling. This simplified the whole process, “We knew exactly where we stood by the time we left Melbourne,” Darren says.

It’s time to get on the plane!

Three months after their first consultation and once all the necessary pre treatment tests were done and analysed the couple were ready to visit for the most important of all stages, the day of the embryo transfer!

Their immediate reaction when they physically visited the clinic was that it was very welcoming and they instantly felt comfortable. Ana said, “This was possibly because we had already established a relationship with the clinic before we even got to Madrid”. In feedback the couple also wanted to place on record that throughout the entire relationship with Tambre communication was never an issue due to the proficiency of the English language skills held by the whole team. Ana was not so concerned about this as she speaks Spanish perfectly but it was most appreciated by her husband who quipped, “I want to apologize to Clínica Tambre for having to put up with my attempts at Spanish during the time we were there!”.

The couple also wanted to convey to us the fond memories they will keep of Maria and Saul, two of our Patient Care coordinators, who guided the couple throughout their treatment and supported them with any concerns and questions they had.

How do they feel now?

Do you remember the embryo transfer we were talking about in the previous paragraphs? Well, the embryo was implanted and wonderful news, it was very successful and now Darren and Ana have a third person by their side, little Robert Micah! The couple were delighted with the speed and efficiency of the whole process; “We’re thankful to the donor, obviously, for donating the egg. We’re also grateful because as a consequence we still have two embryos, so it’s an opportunity for the future, perhaps in the near future, to give this little guy a brother or a little sister,” says Ana.

Darren says he will remember the visit to Tambre fondly and considers it as a very positive thing. Thanks to Tambre’s flexibility, they were able to prepare and access some tests at home and take advantage of travelling to Madrid for the all-important transfer.

What advice can Ana and Darren give us?

Based on her own experience it is hardly surprising that Ana says that fertility treatments are not easy, there are many bumps along the way and the road is not always as straight and smooth as one would like. Sometimes however treatment is the only option, “If you don’t have any other options and you still want to conceive, then I certainly would suggest looking into this path and making your enquiries and doing your research,” she says.

The couple end their video testimony by recommending Clínica Tambre and saying that they continue to have contact with us, that they send us photos of Robert and that they could not be happier with the way everything went.

Ana and Darren wanted to wish, finally, all the luck in the world to all those who will follow the path they have trod, “We’re just grateful for the opportunity we’ve had to have a family,” Darren acknowledges.