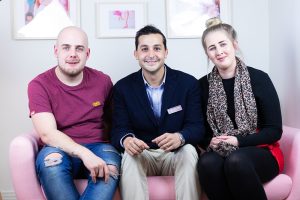 A few days ago, we announced that some very special patients were going to be joining us for their fertility journey. Kirstie and Chris are a couple from Northern Ireland who, despite their youth, have already proven to be natural born fighters.

They met 7 years ago, and from the beginning they knew one thing for sure: they wanted to be parents as soon as possible. From the start they suspected they were going to have complications, they knew they would have to face challenges, so they decided to confront their future strongly.

Some time ago they met Andrew Coutts, our friend from Fertility Road and International Fertility Company, who has been a great support to them. Andrew is an inspiring figure who does everything in his power to help.

Kirstie and Chris’ timeline with assisted reproduction, unfortunately, does not begin here. The couple has already had to cope with two failed cycles of egg donation, as well as a successful cycle that ended in a miscarriage.

Tambre considers it remarkable and brave that people like Kirstie and Chris decide to continue trying to reach their goal with our support. We know it isn’t easy to resurface after facing so many adversities.

How did they prepare to begin this new stage?

Kirstie says that in these situations, overthinking is inevitable, as many emotions and changes are involved. “You don’t know what to expect”, says Chris, although thanks to Andrew they had an idea of how they were going to be treated at Tambre.

Before heading to Madrid, they felt nervous; arriving at a new clinic is exciting. Meeting a new doctor and a new team means repeating your story. It means reopening wounds and taking in new information. However, they were also excited because it marked the beginning of a new chapter.

When they arrived at Tambre, the first thing that caught their attention were the modern facilities and the state-of-the-art look and feel. They also adored the waiting area, which is divided into individual spaces. “It’s far nicer than being in a big room, it’s more personal,” says Chris. 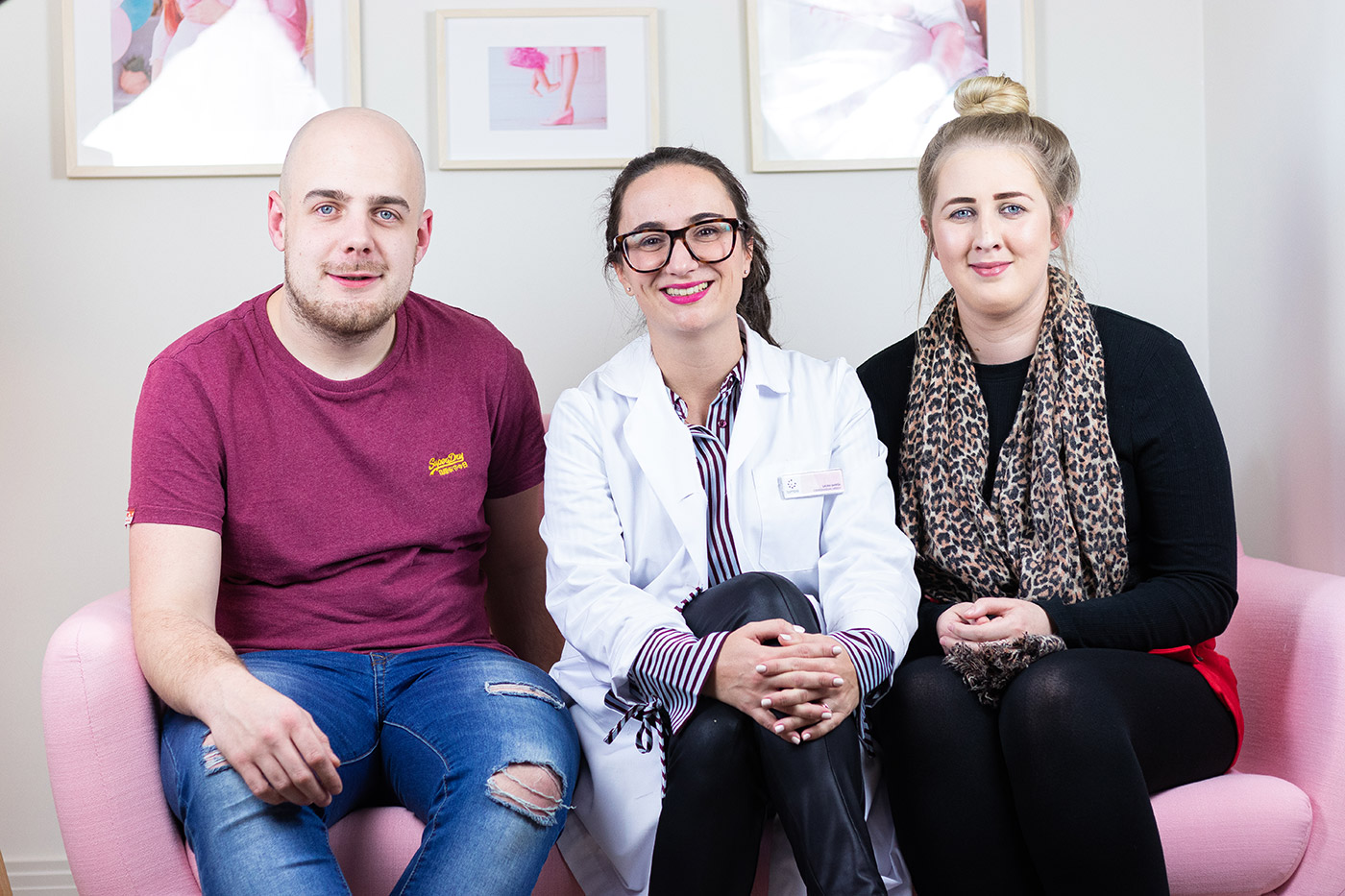 Additionally, what delighted them was the closeness of Tambre’s team. Kirstie believes the entire staff is very friendly and appreciates that Saúl Mizrahi, their coordinator, is so approachable and warm. “It’s a nice atmosphere, you feel welcome, you don’t feel like awkward,” she says.

They have also been lucky being with Dr. Laura Garcia who is taking their case and shared with them an extensive first visit. Our patients have left the centre feeling very pleased because they have managed to resolve all their doubts and have already familiarised with the treatment plan they are going to follow. “We’re putting everything that we have in your hands”, recognises Kirstie.

What did they take away from this first visit?

Now that they have met us, they see things from a different perspective. Their biggest concern, which was the language barrier, faded as soon as they met our English-speaking team.

As for having to leave their country for treatment they say: “You know what? It’s actually easier than you think”. The couple explains that Madrid is accessible, and their hotel is lovely. They believe that communication with the clinic and in this case with Andrew, is crucial before traveling.

They also value the fact that there are tests that can be carried out here, which saves a lot of time. Kirstie says that she would highly recommend Tambre. “We feel comfortable in the clinic. We feel like an individual, it doesn’t feel like you are just doing your job. You make it feel like you’re there for us, to help us achieve our dream” 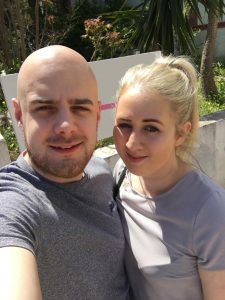 A new adventure is about to unfold on Tambre’s blog. Some time ago our collaborator and friend, Andrew Coutts, from International Fertility Company and Fertility Road reached out to tell us a very special story: the case of Kirstie and Chris.

Despite their youth, this couple from Northern Ireland have faced a complicated fertility path. Following an unsuccessful cycle at home in 2016 Kirstie and Chris were chosen to participate in Fertility Road’s Journey project in 2018. Unfortunately their first egg donation treatment was unsuccessful and the couple returned to the clinic in April of this year. The subsequent treatment was successful but heartbreakingly Kirstie suffered a loss shortly after returning home.

Fertility Road Editor, Andrew kept in constant contact with the couple and set about finding them a fertility clinic who would consider addressing their very specific requirements. Given Andrew’s extensive experience in the fertility sector, he recognised that Tambre’s background in dealing with complex cases was a good fit and approached us.

Our medical team reviewed the couple’s health notes and although recognising the challenges it faced instantly agreed to helping the couple. Tambre’s Chief Executive Officer, Inge Kormelink said, “we were delighted to help Kirstie and Chris following an introduction by Fertility Road. We will do our utmost to help this couple achieve their dream of family life”

The story now begins and we will be following the couple as they visit Tambre for the first time and beginning what we hope, will be a very successful fertility journey. Follow their story in our blog, Fertility Road and the International Fertility Company.

For the moment we share a letter written by Kirstie and Chris which reflects their sadness at previous treatments but looks forward with hope and optimism about the next part of their journey.

“After 2 failed egg donation cycles and 1 positive cycle (silent miscarriage) we continued our fertility journey. I took some time off work to grieve and allow myself to come to terms with what had happened. I just could not believe that the pregnancy ended, it was our worst nightmare come true.

Andrew, the editor at the magazine Fertility Road, kept in close contact with us during the time after the miscarriage, he was immensely supportive, and he deserves great credit for his kind nature and personal approach. Any questions we had Andrew was there every time offering his advice.

During such a traumatic time, you naturally begin to lose hope and wonder how or if things would ever work out. You start to question yourself and think you did something wrong. Of course, nobody did anything wrong, it was just one of these things. Going through the miscarriage and the weeks that followed brought us even closer as a couple and strengthened even further the love we have for each other.

Even after this natural period of grief, we knew deep down in our hearts that we can never give up on our dream of having a child. Chris & I are both firm believers in that “all your dreams can come true, if you have the courage to pursue them”.

We began to start raising the funds needed to go into another IVF cycle (using donor eggs). Here we are today, just a week or two after we received some excellent news. The best news we could have ever hoped for. Andrew was in touch with Tambre, one of the Spanish clinics. When they heard about our case, they didn’t think twice and decided to help us. We are looking forward to going through another fertility journey with Andrew in our corner, we couldn’t do it without him.

We both cried with joy and disbelief. We felt really blessed to have another chance in another place. We were on top of the world.

We just feel so lucky to be given this opportunity. After doing some research around Tambre, they really do sound like a top-class clinic and we just can’t wait to go there and meet everyone. Spain is such an easy country for us to get to which will hopefully help make things easier.

IVF is such a tough journey to go on. There are difficult moments throughout each and every journey. We feel ready to start our new chapter in Spain. I would advise anyone not to give up and to keep going. There have been many times throughout the past few years that we have struggled to remain hopeful but there is always hope and that’s what keeps us going.

This year has been a rollercoaster already and as I write this, it’s only September! There is now light at the end of the tunnel in the form of Clinica Tambre and hopefully with the best efforts of all of us, we can experience our dream come true with the help of them! We can’t wait to get started.

Now as we plan to head to Spain we look forward to meeting all the team at the clinic and of course Andrew, whilst we go through this journey together.”