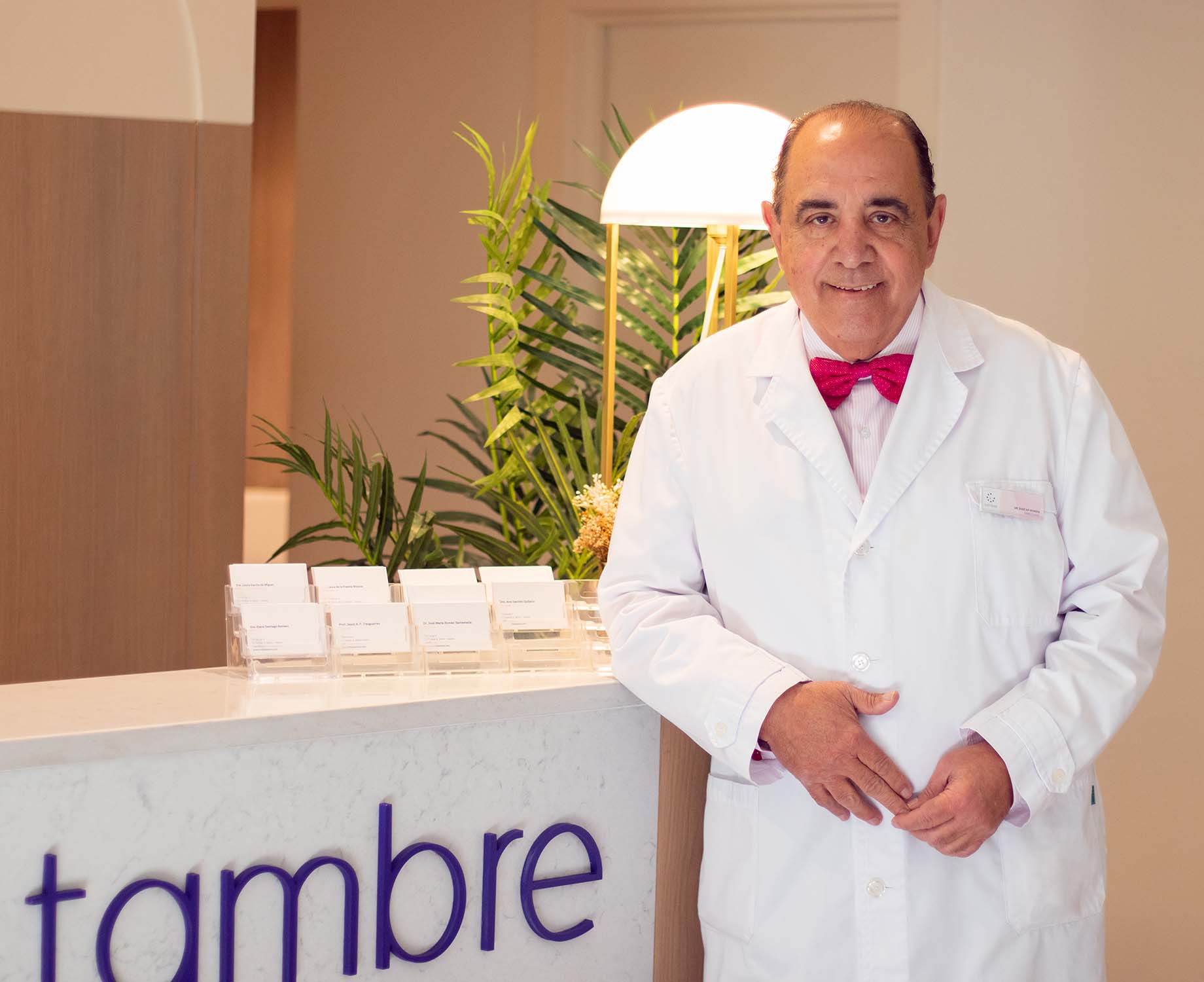 “The current trend in breast pathology units is to work with increasing focus on the early diagnosis.”

A reference in the specialty of gynecology, Dr Román Santamaría leads the Maternity Unit of Fertility Clinic Tambre where they diagnose and treat all types of mammary pathologies, including breast cancer.

He has carried out over 6,000 surgeries during his professional career and will explain in detail the current situation and the future forecast of breast units, as well as breast cancer in particular.

What is the objective of the Breast Unit at Fertility Clinic Tambre?

The main thing is to try to solve all mammary pathologies, from the mildest to the most serious such as cancer and not only that. Another of our objectives is also to focus on human reproduction regarding cancer.

There are more and more women who have to face cancer at a young age, so it is not only the fact of improving their health, but also that we commit ourselves to ensure their fertility. By this I mean that we can preserve their eggs in the clinic by freezing them, before starting any kind of aggressive treatment so later on the woman can become a mother if would like to.

What are the current epidemiological data about breast cancer in Spain?

The data has been changing a lot. The problem that exists in Spain is that there is not a correct tumors registry and we have never known exactly how many cancer cases were being diagnosed in our country, but now we are perfecting this data collection and we can say that the figure amounts to 22,000 cases of breast cancer per year.

They are becoming more frequent in women from 45 years of age than in women who theoretically are still more fertile. It is the fourth most diagnosed tumor and the first among women.

There is a lot of research about it, but it must be said that the numbers of affected people do not grow as much as it is speculated. What is not the slightest doubt, is that the more the average age of the population increases, the greater the presence of cancer. If, for example, at 30 years of age, one cancer per 100 women appears, at 80 there are 10 cancer cases per 100.

What are professions in mammary pathology units currently working on?

Currently the main focus is on the early diagnosis. I think that is the reason why many more cancer cases are cured, this is not the only reason, obviously, but in the future it will continue to be the basis for reducing the mortality figures due to this cause.

With this, I refer to early diagnosis from a gynecological perspective, because there is no primary prevention of breast cancer. Unfortunately, there is nothing that can be recommended to avoid it.

Additionally, above all we are working on improvements from the surgical point of view. Always applying the most appropriate surgery for each patient and advancing in the treatment of breast reconstruction. We do not want any woman to leave any of these units without having a new breast. And we are also working on the study of the lymph nodes, trying to remove only the necessary ones.

How much more effective will treatments become in the next years?

The future expectation is that each time the surgery is much less aggressive, even though it is a radical surgery and it supposes the tumor elimination. With this, we are implementing a series of medication prior to surgery that is giving us the possibility of doing this type of intervention, but without losing a bit of effectiveness. Therapy and immunotherapy are currently developing extremely and that is what is really going to decrease deaths from tumors.

And regarding the postoperative period?

There are many advances as well. In fact, most of the patients today come in the morning and leave in the afternoon, always in case of the most logical and conservative surgeries, in which most women can go home perfectly on the same day, which was not like that before.

Another new breakthrough is related to the sentinel node. The first node in the tumor chain towards the axilla is currently being studied in the same operating theatre right before the woman will be woken up and if it is not affected, it will not be removed.

Out of all the integral treatment that the patient receives since she enters the health circuit, which one do you think would be necessary to improve in the future?

I think the part that should be improved is post-surgery, e.g. nursing consultations, lymphedema … we must take even more care on how to guide them now to make a healthy life. Doctors are very focused on diagnosing, treating and intervening surgically, but then the woman falls into a vacuum when she arrives at home and has gone through all that process and it is a very important moment that requires a lot of care so that the woman recovers to all levels.

For you as a doctor, what is the most critical moment in this process?

There is a very difficult moment, that is when you have to communicate to the woman that she has cancer. But at the same time, you have to give hope and tell her about the healing possibilities. We cannot betray a patient or tell half-truths, but we can help her to have more confidence in that at the end of the process she can be cured.

In this context, what are the basic tools for the patient to face cancer more effectively?

The most important thing is full confidence in the responsible doctor. You have to have a good doctor-patient relationship so that everything goes as smoothly as possible.

On a personal basis, what is the most rewarding thing about having operated so many women with this disease?

To keep the relationship my patients have with me. That is something ideal for me and a tremendous reward for my work.

What challenges in a breast cancer unit will you face in the future?

To work more closely with other related specialties, such as oncology or radiotherapy. If we are working more and more on that early diagnosis we were talking about, the quicker the start of the treatment and the results can be much more positive.

About our Breast Unit.